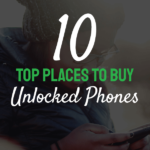 Besides, you could save hundreds or even thousands of dollars if you can purchase an unlocked phone instead of a locked one.

We’ll show you where the best places are to buy unlocked phones.  Plus, you’ll find out more information on why you might want to buy an unlocked phone instead of a locked one.

When you’re buying an unlocked phone, you’ll want to be sure to read the fine print to see if it’s new or refurbished. If you buy directly from a manufacturer, you can typically find both new and refurbished phones.

But many third-party retailers only sell refurbished phones. This means they’ve been cleaned up and returned to “like new” condition. Now, manufacturers refurbish and sell their own phones that have been returned.

Here are a few of our favorites.

We all know that Amazon carries just about everything you could want or need. Unlocked cell phones are no exception.

Plus, several others which you may or may not have heard of. Of course, as is customary with Amazon, many times, you’ll get free shipping when you buy unlocked phones. And if you’ve got Amazon Prime, you can get free two-day shipping.

Amazon offers both new and used unlocked phones. And they sell from manufacturers and third-party sellers. So you’ll want to check with the seller regarding warranties and such. Each seller will have different terms and conditions as far as warranties and returns go.

As usual, Amazon offers some of the best prices and largest variety out there on unlocked phones.

Walmart is another retailer that sells a lot of unlocked phones. When I checked for this article, the Walmart website had unlocked phones in brands such as:

Walmart offers unlocked phones in a wide variety of styles and prices as well. I found an old fashioned style unlocked phone for $29.99 and an iPhone SE for $400. And everything in between.

Note that when you’re shopping in-store, you’ll likely only find new unlocked phones. And of course, buying in the store means you’ll get your phone right away.

However, when shopping at Walmart online, they connect to thousands of third-party retailers. This means you can find refurbished unlocked phones on the Walmart site if you put that term in the search bar.

Best Buy also has a large selection if you want to buy unlocked phones.

You can choose from several brands such as:

Notably, one thing you might see on Best Buy and some of the other sites is that the prices they’re showing say “Activate today.” They also might have a higher price shown that says “Activate later.”

In other words, you’ll save money if you activate the phone today when you purchase it at Best Buy and activate it with one of Best Buy’s carrier partners. Plus, the price might vary based on which carrier you use as well.

For instance, I clicked on a few listings for an unlocked iPhone at Best Buy. Based on when I activated and which carrier I went with, it showed me different purchase prices.

Remember that it’s essential to read the fine print if you take advantage of a deal like this. Know what you’ll be paying each month, what the term is if you’re locked into a contract and what it might cost you if you cancel that contract.

You should also be aware that you might find these kinds of pricing deals with other retailers of unlocked phones as well.

On top of that, they only allow sellers to sell phones with working batteries. And although you won’t be able to return a phone you buy on Swappa, the site does have a thorough review process for all listings.

They also have an evaluation system where you can review sellers and leave comments. All of these precautions make buying an unlocked phone from Swappa safer.

And Swappa offers a variety of unlocked cell phones from different manufacturers too, including:

If you’re looking to sell a used cell phone, Swappa can help you there, too, as can several other sites. See this article for more on selling used cell phones to places like Swappa.

The site features brands such as:

Be aware that Target has a disclaimer on some of their listings that most of their unlocked cell phones are compatible with GSM carriers but not with CDMA carriers. See the section below for the difference.

And note that some iPhones on the Target site are compatible with both GSM and CDMA carriers. You might want to check other sites as well to learn more about compatibility before buying.

Newegg is a tech-focused online retailer that sells cell phones, laptops, PCs and a host of other tech gadgets. As far as unlocked phones go, they’ve got a smaller selection of phone brands.

However, they’ve got great prices and both new and used unlocked phones. When I visited the site, I only saw Samsung, iPhone, and Motorola for sale.

But the prices seem competitive. Note that Newegg has phones that are sold by Newegg as well as phones sold by third-party retailers. Keep that in mind when you’re looking at shipping costs and return policies.

Also, Newegg may charge a restocking fee on a returned item. In other words, read the fine print before you buy.

You’ve probably heard of Overstock and maybe even shopped on the site. I knew Overstock was great for buying home decor items and furniture.

As of this writing, Overstock is offering free shipping to the contiguous 48 states. And they offer free returns for items purchased within the last 30 days if they’re new and unused.

Note that like Newegg, Overstock advertises refurbished phones and other items sold by approved third-party retailers in their Marketplace section.

eBay is another popular site for purchasing unlocked phones. As with other sites, eBay sells both new and used unlocked cell phones.

They’ve got pretty much every brand and type of phone available. And some sellers offer pretty attractive prices too.

As eBay is a seller’s marketplace, you’ll want to be sure to check the terms on your purchase. With any seller you’re considering working with, read the fine print, check shipping costs and the return policies.

While most eBay sellers are just guys (and gals) selling stuff out of their garage, they have worked to become experts at buying and reselling items for a profit. In other words, retail arbitrage.

However, it’s still best when buying from a marketplace like eBay to do some research before you buy.

Personally, I’ve found eBay’s reviews section to be very helpful in this regard. Buyers are happy to leave reviews for sellers, both good and bad. And I definitely look at the reviews when I’m buying anything from an eBay seller.

Gazelle is another electronics site that specializes in buying and selling cell phones. Note that with Gazelle, you’ll likely only find used unlocked cell phones to buy.

To explain, Gazelle buys phones from customers and then refurbishes and sells those phones. They offer a certified quality guarantee, a 30-day return policy, and low prices.

Because Gazelle buys from a wide variety of buyers, you can buy unlocked phones from various manufacturers such as Apple, Samsung, Nokia and many more.

Each phone has a condition stated either Excellent, Good or Fair. This rating helps you know more about the phone you’re looking to buy. Shipping prices are based on the weight of the phone, and phones are shipped primarily through USPS or FedEx.

Gazelle provides tracking numbers with all purchases as well.

B& H Photo Video has become somewhat of a phenomenon in the retail world. The company’s superstore is in New York City; however, they’ve created a large online following. The company sells photo and video equipment, as well as cell phones and other tech items.

You can find many different brands of unlocked phones here. Shipping is free for most purchases over $49, and they’ve got a 30-day return policy.

They offer returns on some used cell phones as well. But you’ll need to see the website for terms and conditions. There may be limitations and a restocking fee involved.

As mentioned above, it’s important to look into the compatibility of a phone before you buy unlocked phones. GSM (Global System for Mobiles) and CDMA (Code Division Multiple Access) have to do with 2G and 3G networks.

They are systems that help operate the phones. In 2010 when 4G came out, all carriers switched to a single network: LTE.

LTE is still in use today in 4G and 5G phones. 5G is the latest in wireless technology. Phones with 5G can connect to most everything virtually.

Moreover, GSM and CDMA are still available for 2G and 3G phones.

Most carriers plan to phase out GSM and CDMA systems by the end of 2021. But until then, you’ll need to know which ones use which systems when you buy an unlocked phone from a third party retailer or a manufacturer.

Since the systems aren’t compatible, you’ll need to know which system the carrier you want to use operates on. But these codes only apply to 2G and 3G phones. If you’re buying a higher grade phone like a 4G or up, the GSM and CDMA standards don’t apply.

So why do you want to know where you can buy unlocked phones? Here’s the deal. When you buy a phone from a carrier, you’re typically buying a “carrier” or “locked” phone. This means that the phone is already set up with the carrier’s settings and usable with that carrier only.

Notably, there can be some advantages to buying locked phones through the carrier. With locked phones, you often get a significant discount on the phone. This bargain is because the carrier rewards you, entices you and encourages you since you’re locking into a contract with them.

Or the list price for a locked phone might be more than if you purchased an unlocked phone. Nevertheless, the carrier might offer special financing options like zero-interest financing. You can pay for the phone over a year or so, easing the financial burden of getting a new phone.

Moreover, with a locked phone, you’re obligated to use that phone with the carrier you bought it from. In other words, you can’t take the phone to another carrier. Well, you might be able to, but there are usually stipulations for doing so. You might have to call the company’s customer service number and request your phone to be unlocked.

And after you make the request, you might find yourself waiting weeks for it to be processed.

The Pros and Cons of Purchasing an Unlocked Phone

Want a high level summary, here are the positives and the negatives for buying an unlocked phone.

With an unlocked phone, you can switch carriers as you please. Any carrier that will let you bring your own phone is a carrier you can use your unlocked phone with.

Besides, you might find that you pay less when you buy an unlocked phone. Third-party retailers that offer a nice discount often sell unlocked phones.

Of course, there are some disadvantages to buying unlocked phones. A phone that’s not locked to a carrier might not work as well with a new carrier whereas the locked phone carriers offer you.

And, if you’re having difficulties with the phone, getting service may be more challenging as well.

When you buy unlocked phones, you can find great deals on pricing without being locked into a specific carrier. While it’s important to purchase with caution–especially when buying used–good deals abound in this market.

What has been your experience with unlocked phones? Tell us in the comments.