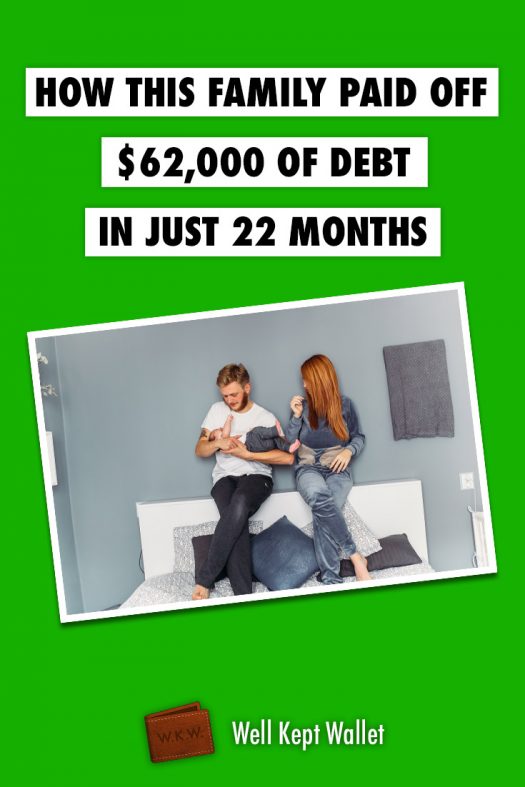 This was the total combined debt from me and my husband. I wish I could say this was mortgage or student loan debt, but sadly it was the very worst kind caused by abusing credit cards and loans.

We got into debt from the very moment that we were legally allowed to obtain credit at age 18, quite simply because we wanted things that we couldn’t afford. Our debt gradually increased for many years before we finally buckled down and made real progress in paying it back.

Stifling is the best way I can describe it. There were times when I felt like I couldn’t breathe because of the worry and stress that comes with having so much debt. We both felt ashamed and embarrassed by the level of our debt, it really knocked our self-esteem and confidence in the end.

We were in debt for 15 long years. We actually tried to pay our debt off several times before succeeding. There came a point where we realized the damage our debts were causing and we put a stop to buying new things. But by then, our debts were already out of control and when my husband lost his job, things got a lot worse.

The extent of our debt squeezed our finances so tightly so that the minute we experienced a life crisis (the job loss), the glass bubble we were living in completely shattered and there could be no more pretending that everything was fine. Once we hit rock bottom and realized the magnitude of our situation, we were able to pay all of the debt off in just 22 months.

After our rock bottom moment, we had no choice but to enter into a debt management plan. We arranged to pay back a lower monthly payment to our creditors, so our credit rating took a huge hit. But that was the least of our problems. We were just grateful to be able to pay our priority bills like the rent and have enough money to buy food!

Then, something happened which we later recognized as our turning point. I came across some information online which outlined the debt snowball method as a way of paying off debt – this works by tackling the smallest debt first and when that first debt has been paid off, the money formerly used to go towards that particular debt could then be used to “snowball” the next smallest debt.

Upon this discovery, I realized two things. The first was that this approach made logical sense to me. I could see how motivating it would be to just get rid of one debt completely, as opposed to chipping away at the debt with the highest interest, which for us, was our largest debt. The latter method would take ages and because we had already tried this several times and given up several times, I knew that we had failed previously because of lack of results!

The second thing I realized was that we weren’t alone in our debt situation. Because of the information I’d found, I knew that there were others like us and even people who had succeeded in paying off an extreme amount of debt. I started to believe that we could do it too. Not long after that, I started my blog Disease Called Debt and found support from the wonderful personal finance community who encouraged me and my husband through the blog to keep going!

Once we’d reached our turning point, we became incredibly focused and seeing results just made us even more determined to clear our debt. Yes, we faced challenges like unexpected bills and wanting to splash out on a purchase but really these challenges were nothing compared to the ones we experienced before we had that light bulb moment.

Our biggest challenge before that was keeping motivated and believing in ourselves that we could really achieve debt freedom.

Our debt did have an impact on our relationship, even before we got married. Truth be told, we blamed each other at times for the fact that the state of our finances was so dire. We had arguments over whether we should buy something on credit with one of us giving in and the other trying desperately not to, all the while trying to live life normally, like “everyone else”.

Luckily, although our relationship was tested many times, we survived the rock bottom episode of our time in debt and came through as survivors! Once we started getting serious about clearing our debt, we stopped blaming each other and recognized the parts we both played in how our debts came about. We’ve always known that money really isn’t everything and it’s nothing compared to family and love. Now, our marriage is stronger than ever before.

Oddly enough, we had both taken huge pay cuts at the time when we started paying off our debt. My husband had just started his own business and was taking a low salary. I was on maternity leave and had just about run out of money from my last well-paid corporate job.

Rather than go back there, I decided to start a home daycare business so that I could raise my daughter without paying out for childcare. We relocated and moved closer to my husband’s business.

Although we didn’t earn a fortune, we saved in other areas such as not needing to commute to work, not needing to buy work clothes and avoiding the temptation of buying morning coffees or work lunches. In addition we started earning money through various side hustles too!

Elated and free. Happy and at peace – less stressed and able to sleep a little easier at night! We still have a long way to go before we’re financially free because we need to save for our own home and make up for lost time in retirement planning. But not having the heavy burden of debt is definitely an incredible feeling.

My first tip would be to keep your debt at the forefront of your mind and never lose sight of your goal. Start overpaying your debt with as much as you can and make those over-payments weekly, rather than monthly.

An emergency fund will help you when those times arise where you need to pay unexpected bills – having a pot of money set aside will ensure you don’t lose momentum in paying off your debt. Above all, never ever give up. If you don’t give up, how can you not succeed?

More about Hayley: Hayley is a freelance writer and personal finance blogger from the UK. She has written many articles about getting out of debt which you can find on her blog www.diseasecalleddebt.com. Hayley has also written a number of eBooks that are available on Amazon. You can also find Hayley on Twitter, Pinterest, and Facebook.