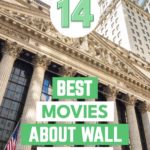 We all have a mental image that pops up when we think about Wall Street. Whether your vision is positive or negative, the financial industry undoubtedly adds drama to our lives and daily newsreels.

Given the mystery and drama surrounding Wall Street, it’s no surprise that it makes for great cinema. Over the years, there have been a handful of financial movies that have stood out as exceptional.

We’ve rounded up the best movies about Wall Street so that you have options to choose from for your next movie night.

American Psycho is a 2000 horror movie starring Christian Bale. It is based on the novel by Bret Easton Ellis.

This movie isn’t specifically about Wall Street and the stock market. Instead, it is about someone who works there. The film follows investment banker Patrick Batemen through his daily routine.

While the main character starts out as egotistical and narcissistic, he becomes downright violent as we learn that he is actually a serial killer.

Overall, American Psycho 2000 is a great stock-market movie for anyone who loves a good horror film.

It follows the story of a college dropout, Seth Davis, who runs an illegal casino from his apartment. In Boiler Room, Davis decides to try his hand at a more legitimate career and becomes a stockbroker at a small-time brokerage firm.

During his time at the company, Davis realizes that not everything is as above-board as he once thought, and he begins to uncover some of the illegal activities going on behind the scenes.

If you are looking for a good crime movie, Boiler Room 2000 is worth adding to your movie night list.

Capitalism: A Love Story is a 2009 documentary written and directed by popular filmmaker Michael Moore. The movie features the different facets of America, from Wall Street to Washington, D.C., to Middle America.

It focuses on the financial crises in the late 2000s, including the wave of foreclosures, unemployment, corporate greed and more. Plus, it looks closely at the impact that capitalism has on American families and what the country could look like instead.

The film takes a humorous approach while still conveying just how serious the topic is. It’s a great choice if you enjoy documentaries but also want a good laugh.

Chasing Madoff is a 2010 documentary written and directed by Jeff Prosserman. It is based on a book by Harry Markopolos.

The movie tells the story of Bernie Madoff and his Ponzi scheme worth nearly $65 million. It primarily consists of interviews with Harry Markopolos and investigators who exposed Madoff’s scheme.

This is a good option for documentary lovers to add to their list of must-watch movies.

5. Enron: The Smartest Guys in the Room

Enron: The Smartest Guys in the Room is a 2005 documentary written and directed by Alex Gibney. It’s based on a book by Bethany McLean and Peter Elkind.

This movie tells the story of the Enron Corporation, where, in 2001, company executives were involved in illegal accounting schemes. These schemes resulted in the collapse of the company and the loss of billions of dollars for its shareholders.

The documentary starts with a profile of the company’s founder and follows the growth of the company, all the way to its collapse. It also tells the story of what happened after.

This is another excellent option for documentary lovers to check out if they are looking for something to watch.

Inside Job is a 2010 documentary written and directed by Charles Ferguson. The movie gives a comprehensive analysis of the financial crisis in the late 2000s.

The documentary splits the story up into different parts. It starts by explaining the history of the American financial industry and examines the housing bubble in the 2000s.

Then, it takes a look at the onset of the financial crises, including the role collateralized debt obligations played. It also looks at what accountability there was for those at fault and where the country was when the documentary was released.

With a rating of PG-13, this documentary could be a good option for family movie night if your kids are a little older and interested in learning more about financial events or the stock market.

Margin Call is a 2011 drama written and directed by J.C Chandler. It stars big names like Zachary Quinto, Stanley Tucci and Kevin Spacey.

The movie takes place at a Wall Street investment bank over a 24-hour period and is set during the financial crisis in the late 2000s. The investment bank is already facing financial troubles and has laid off employees, including risk management employees.

Those on their way out warn the company about what’s to come since the firm is over-leveraged in risky assets that could eventually bankrupt it.

Margin Call 2011 gives a less-than-stellar depiction of the actions of Wall Street executives at the expense of other investors. It’s a great option if you enjoy movies that are filled with drama.

Rogue Trader is a 1999 crime drama based in the United Kingdom. The movie was written and directed by James Dearden and stars Ewan McGregor as well as Anna Friel.

While the movie isn’t technically about Wall Street, Rogue Trader includes many of the elements you’d expect in a Wall Street drama. It follows the story of Nick Leeson, an employee of Barings Bank who begins rising through the ranks.

Nick begins making major gambles, which result in him losing the bank’s money. The story continues as he tries to hide his losses from his employer.

If crime movies are your thing and you are looking for something to watch that has Wall Street undertones, Rogue Trader 1999 is worth checking out.

This movie tells the story of the 2000s financial crisis through the lens of several characters. One character predicts the impending financial crisis, while the others learn about this prediction and uncover some of what’s going on behind the scenes.

The characters in the movie are able to profit by betting against the housing market they know is going to crash. Along with telling a compelling story, the film breaks the fourth wall and uses creative tactics to explain financial concepts to the viewer.

This movie is a great option if you are looking for something humorous yet dramatic.

10. The Wolf of Wall Street

The Wolf of Wall Street is one of the most popular movies about Wall Street.

This 2013 comedy and crime drama was written by Terence Winter and is based on the biography of Jordan Belfort. Starring Leonardo DiCaprio, Jonah Hill, Margot Robbie and Matthew McConaughey, it was directed by Martin Scorsese.

It follows the story of Belfort, a securities trader who starts his own brokerage firm, which quickly grows. The movie shows the characters’ substance abuse, corruption and illegal behavior. Ultimately, Belfort finds himself under investigation by the FBI.

If you are looking for something that offers a blend of comedy, crime and drama, The Wolf of Wall Street is the movie for you. Just make sure you have the time to invest in watching this, as its run time is three hours.

Too Big to Fail is a 2011 TV movie directed by Curtis Hanson. It is based on Andrew Ross Sorkin’s book, Too Big to Fail: The Inside Story of How Wall Street and Washington Fought to Save the Financial System — And Themselves.

The movie tells the story of the late-2000s financial crisis and what happened to the financial institutions that failed (or almost failed) during that time.

It also covers the actions of U.S. Treasury Secretary Henry Paulson and Chairman of the Federal Reserve Ben Bernanke in an effort to prevent and solve the crisis.

If you are looking for a drama to round out your movie night list, this stock market film is worth considering.

Trading Places is a 1983 comedy written by Timothy Harris and Herschel Weingrod. It was directed by John Landis and stars Eddie Murphy as well as Dan Aykroyd.

The movie tells the story of a commodities broker and a street hustler who cross paths. They are made the subject of a bet about how the two men would fare if their circumstances were swapped.

As a result of the bet, the commodities broker loses his job, which is then given to the street hustler. The movie shows how the two main characters join forces against the brothers who created their new situation.

Trading Places 1983 is another great stock market comedy to add to your must-watch movie list.

Wall Street 1987 crime drama written by Stanley Weiser and Oliver Stone. It was directed by Oliver Stone and stars Charlie Sheen as well as Michael Douglas.

The movie tells the story of a stockbroker who trades mentorship from a corporate raider for insider trading information. This stockbroker quickly ends up out of his league and dealing with a world of greed and schemes.

Ultimately, he must make a difficult decision about his loyalties. If drama and crime are two elements you must have in a film, Wall Street 1987 is worth checking out.

Wall Street: Money Never Sleeps 2013, which takes place more than two decades after the first, once again follows the story of the corporate raider from the original movie, Gordon Gekko.

The main character has recently been released from prison and is trying to repair his relationship with his family while simultaneously dealing with the impending financial crisis.

Wall Street 2013 is a stock market film you should consider watching if you enjoyed the first film.

Do you have questions about the best movies about Wall Street? These answers can help.

How can I watch the best movies about Wall Street?

Many of the best movies about Wall Street are available to stream on Amazon, Netflix, Hulu or your other favorite streaming services.

If they aren’t available to stream, you can rent them online.

Are all the best movies about Wall Street true?

Many of the best movies about Wall Street are based on real-world events. However, they take some creative liberties, especially as it relates to the character’s stories.

Are there any good movies about Wall Street for kids?

Many of the movies on our list may not be appropriate for children since they have somewhat complex financial storylines and adult content.

The majority of the films are rated R, with the exception of Inside Job and Wall Street: Money Never Sleeps. These movies are both rated PG-13 and could be good for teens who are interested in personal finance.

Many of us dread mentions of Wall Street when we’re watching the news, yet it remains a popular and entertaining topic when it comes to movies.

These movies about Wall Street span many different genres and different ratings, so every movie fan will be able to find something that’s perfect for their next movie marathon.