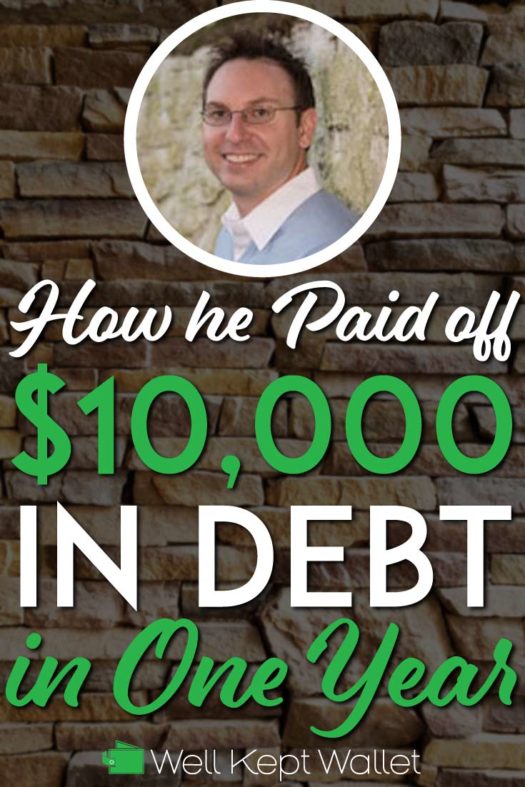 The $10,000 was all credit card debt. I got into it starting my sophomore year of college. It wasn’t because I was “bad” with money, but I had my first girlfriend and I had low self-esteem. I thought the only way to love her was to buy her love. So I took her to dinners and bought her things that I really couldn’t afford.

That debt stayed with me through graduation. My plan was to get a great paying job and become financially successful. But at the time (back in the early 2000’s), we were in a recession and jobs were hard to come by. I couldn’t find a job and became depressed. This led me to start buying things to feel good. As the “high” faded quicker and quicker, I bought more and more, leading to more debt.

It wasn’t fun. I dreaded getting the bills in the mail. I hoped to make more than the minimum payment, but most times couldn’t. I knew that credit card debt was bad, but at the time, I just couldn’t help myself and I kept spending. I felt worthless.

Close to a year after graduating, I took a part-time job that allowed me to at least pay a little more than the minimum each month. A few months after that, I got a full-time temporary job that lasted 5 months. I kept the part-time job and used that paycheck along with money from the temp job to accelerate my debt payoff.

I went through the payoff process on my own. I considered a personal loan at one point, but realized there wouldn’t be enough of an advantage to going that route. So I set up a snowball method and followed that until my debt was eliminated.

I faced many challenges along the way. Being a finance major in college, I knew that credit card debt and paying sky-high interest was bad. My first attempt to get out of debt was to open a new credit card with a 0% balance transfer offer. I shifted all of my debt from one card to the new card. Unfortunately, I quickly started to spend on the first card again.

A few months later, thinking I was finally able to kick the debt, I opened a third card with another 0% balance transfer offer. I moved the new debt from my original card to this third card. Sadly, the cycle repeated and I started to spend on the first card all over again.

The relationship with my college girlfriend ended in college and I was single again for most of the story. I did meet a new girl and began dating her near the end of my debt payoff journey. By this time I had learned my lesson and didn’t try to “buy” her love.

It felt amazing to get out of debt. But it felt just as good when I had the “ah-ha” moment that I realized what I was doing to get into debt. No longer did I feel worthless or not in control of my life.

I do remember after paying off my debt, I received a credit card statement in the mail. My heart skipped a beat – not in the good way – wondering why I was getting this since I had paid off my debt. When I opened the statement, it showed a $0 balance. I guess they sent it just to confirm with me that the card was paid off.

The best advice I have is to sit down and figure out the root cause of the problem. I thought I was just overspending at the time. But the issue was more than that. This is why when I tried to get out of debt the first and second times, I failed miserably. I never addressed the real issue – my depression and low self-esteem.

I know that it isn’t easy, or fun to look within and admit you are flawed. But trust me when I say that the pain, hurt and tears from doing this are more than worth it. If I wouldn’t have addressed the issue, I would probably still be in credit card debt today and hating life.

Next, confide in others or use visualization to help you. When I realized what I was doing, I took all of the clothes and electronics I bought on credit and piled them on my bed. I took a picture and carried it with me as a reminder of all of the stuff I bought and didn’t need or even use. I also told my best friend. He was a great shoulder to lean on too when my willpower was weak.

Finally, don’t ever give up. I failed twice before conquering my debt. I learned something new each time. Don’t be afraid of failing. Failing is a good thing because you are trying something new and growing as a person. Take the time to learn from your failure and grow as a person from it.

If you want to learn more about Jon and his story, you can follow him over at his site, Money Smart Guides.