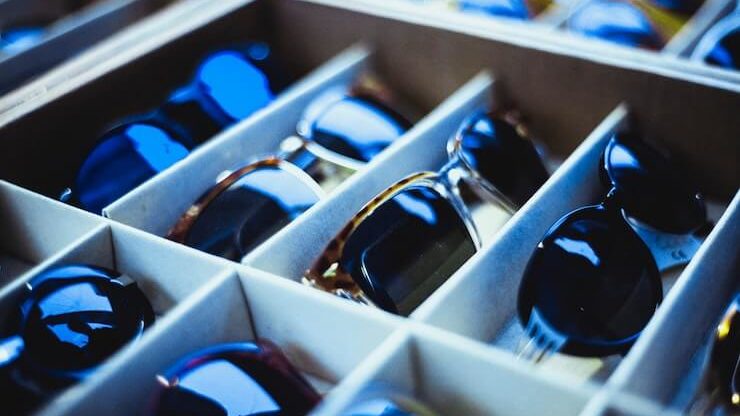 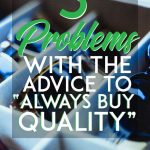 Buy cheap and it’ll cost you.

You’ve undoubtedly heard a version of this advice before. Theoretically, it makes sense. Instead of buying cheap junk you have to replace time and time again, which is expensive and wasteful, buy quality items that will last. You’ll save money in the long run.

While this advice makes sense in theory, it’s not so simple in practice. There are a few problems with the blanket advice to “always buy quality.”

The following excerpt, taken from a Terry Pratchett novel, is often used to make the case for quality:

“A man who could afford fifty dollars had a pair of boots that’d still be keeping his feet dry in ten years’ time, while the poor man who could only afford cheap boots would have spent a hundred dollars on boots in the same time and would still have wet feet.”

It’s a great excerpt from Pratchett’s graphic novel, Men at Arms. But the point of Pratchett’s excerpt (which he called the “Sam Vimes ‘Boots’ Theory of Socioeconomic Unfairness”) is that many folks can’t afford to buy quality.

This is an important lesson the blanket advice tends to overlook. You may not have the short-term cash to buy the higher quality item. Which brings us to the next problem.

It Can Be an Excuse to Spend

My justification? “Doc Martens are quality. I’ll have them forever!” Instead of buying a cheaper pair of boots that I could actually afford, I put those quality boots on a high-interest credit card.

I never wore them, but I spent years paying off that credit card (thanks to subsequent poor spending decisions).

The point is, it’s easy to use “I’m buying quality” as an excuse to overspend. Yeah, that Kitchenaid mixer is a solid, quality tool that will last you for years. That doesn’t necessarily mean you need to spend $300 on one.

The advice to spend more on quality implies that if you buy something cheaper, it’s not going to last as long as a more expensive version. That’s not always true. Just because something costs less doesn’t mean it’s lacking in quality.

Sunglasses are a great example. Sure, you could spend $520 on a pair of new glasses and convince yourself it’s an “investment” and that you’ll have those frames forever.

In reality, The Wall Street Journal found these glasses are made by the same company, likely even in the same factory, as their cheaper versions. As one ophthalmologist and research director said, “A significant chunk of what you pay for isn’t the quality of the lenses, it’s the brand.”

The bottom line: price is not always an indicator of quality.

Okay, you get it. “Buy quality” is oversimplified advice. So how do you know when it’s worth buying quality, and if the quality item is beyond your budget, how do you afford it? Here are a few questions to consider when you spend.

How often are you going to use the item?

If you’re going to splurge on that Kitchenaid mixer, make sure you’ll actually use it. It might even help to calculate your cost per use.

Estimate how many times you’ll actually use the item over its lifespan, then divide the cost by that number.

Let’s say you’ll use that mixer an average of twice a week for the next ten years. At $300 for a mixer, that’s 28 cents per use  — not bad. On the other hand, if you only use it three times a year, that makes your cost per use $10. Not a great deal.

Is the cheaper version just as good?

These are basically the same items, just without the more expensive brand names attached.

This is true for many generic, private-label store brands. Often enough, they’re owned by the big, national brands you’re familiar with. So you’ll essentially get the same quality product for less money.

What do I consider “quality”?

Quality doesn’t just mean something that will last a long time, though.

So even though a $25 pair of jeans will probably last you just as long as a $100 pair, there are other factors to consider, like the labor that went into making those jeans. Consider the other “quality” factors that are important to you.

Can I buy quality at a discount?

You might be able to find used versions of quality items on sites like Craigslist. Other places you can buy quality items second hand: high-end consignment shops, and even garage sales.

Pro tip: January is the best time to shop for these items, as many people purge their closets after the holidays or give away gifts they might not want.

By all means, buy quality when you can. Just don’t follow the advice mindlessly. You work hard for your money. The stuff you spend it on deserves a little more thought.