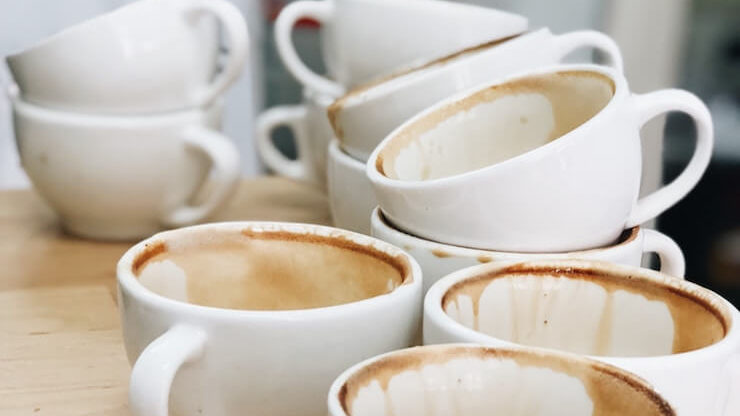 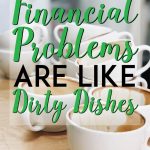 The other day I was scrubbing a dish that had been sitting in the sink for over a day and I was getting slightly aggravated. I realized that it took me much longer to clean the dish than if I would have just cleaned it immediately when I was done with it. Then it dawned on me, our finances can have a similar result. The longer you wait to clean up your financial problems, the harder it can get; just like dirty dishes. Imagine that if instead of letting your financial problems pile up in the sink, you decided to take care of them as soon as they arise. you would probably have less stress and more money is my guess. But this is easier said than done, right?

How to practically address your financial problems quickly

If you start to recognize that there is a problem, that is good. Most people don’t even recognize that there is a problem until the sink is full and every dish is caked with food that is weeks old. Once you acknowledge there is an issue to address, then you need to create a plan to solve the problem. Here are some common financial messes that people get into (including myself) and how to address them quickly to minimize the blow:

Maxing out a credit card

When I was 18 I decided to apply for every credit card that I could. It felt like a privilege that these institutions would lend me money and I wanted to see how far I could take it. I think I was able to get 5 different cards until my application finally got denied from another lender. I will admit that I ended up maxing out multiple cards as it was so easy to spend and not think of the consequences.

What to do if you have maxed out a credit card

The first thing you should do is save up a Starter Emergency Fund of $1,000 while paying minimum payments on all of your debt. This is important because it ensures that you don’t have to go into more debt if an emergency arises. The next thing you should do is cut up your credit cards. Cutting up the credit card shows a conscious decision to stop using debt to fund your lifestyle and start using cash. This does not mean that the credit card accounts are closed, so you do have to continue paying the outstanding balances off.Then use the Debt Snowball method, listing your debts smallest to largest using the Debt Elimination form. This will help you get some momentum to pay off your debt quickly and is the approach we took when we paid off $52,000 in debt in 18 months.

When Kim and I got married, we decided to combine our finances into one account. This was helpful because we were able to see all of our finances in one place, for the most part, and it was easy to see spending habits that we needed to improve upon. I recall one time that she had made a purchase that I was not expecting, while at the same time, I too had made multiple purchases going that were going through at the same time. Well, I don’t know if you have experienced this but when you get a $35 overdraft for $1.30 Redbox purchase, it makes you want to blow your lid. It ended up being multiple small purchases that went through and the overdraft fees were over $100!

If the purchases are still processing you should transfer money from savings or deposit cash right away. This will potentially avoid overdraft fees as these type of deposit transactions usually happen instantly and can post before the purchases actually go through. If you have officially over-drafted your account and have been charged overdraft fees, call the bank and ask them if they would waive the fees. If you have never asked them to do this before, there is a high likelihood that they will waive them.

Paying bills past the due date

It seems like the older I get, the more bills I have. When I was younger, I didn’t have many responsibilities and paying bills wasn’t a priority as much for me. Today I make it a point to pay bills as early as possible for two reasons. One, I don’t want to pay late fees and two, I don’t have to think about them anymore once they are paid. That being said, in my not-so-financially savvy days, I paid my fair share of late fees.

What to do if your payment is late

Many creditors/services have a grace period of 10-15 days before you get charged a late fee. You should review your statement and see if that is true for the particular payment that is late. If so, you should be in the clear if it is in that window of time. If you have been charged a late fee, just like with over-drafting your bank account, call the institution, apologize for being late and ask if they would be willing to remove the late fee. One other thing that I did that was helpful was I downloaded a Bill reminder app for my phone. I programmed in the date the bill was due, the amount and who the bill was owed to. This helped us to stay on track and to make sure that we were paying our bills on time.

In 2006 I got a promotion to Assistant General Manager at a store called Ultimate Electronics. I went from making an hourly wage to making a salary of $40,000/year. I had all of this extra cash sitting around that I thought I needed to put to work. At the time, a lot of my friends were buying real estate in the Phoenix area and some of them were even buying multiple properties. So that is what I decided to do. I bought two condos where the payments were more than half my annual salary. Seems crazy, right? I was able to make it work for a while as I rented out rooms to friends to help pay the mortgages. As soon as I started losing renters though, I quickly started to realize that my strategy was not sustainable. I was house poor, not in the traditional sense, but every extra cent I had gone to keep those two properties afloat.

What to do if you are house poor

If you have bought more house than you can afford, the first thing you can do is consider downsizing. This really only works if you have equity in your home and this decision could save you thousands, if not tens of thousands of dollars per year. You can also consider renting out a room in your house to help chip away at your mortgage. If you are married, you might want to consult with your spouse before going this route.

Looking back, I realized that the first 5 cars that I bought I had saved up and paid cash for. Then one day I decided that I wanted a Mazda RX-7 that I saw at a “Buy Here, Pay Here” lot. I didn’t have the cash to pay for it, so I decided to take out a loan with the small dealership that was selling it. I did two stupid things that day: I signed for a loan that was over 20% interest annually and I had my mom co-sign for the car as they would not let me buy it on my own. I was young and my income was sporadic, so I missed some payments and my mom’s credit had to suffer for it.

What to do if you have co-signed for a loan

My advice, do whatever you can to get your name off of that loan. I have coached hundreds of people on how to manage their finances over the year and the majority of them who had co-signed for a loan wished that they hadn’t. I understand the intent is to help the other person, however, if they hit tough times and they are unable to pay, you will be responsible for flipping the bill and if you can’t, your credit will suffer for it.

Have you made any of these financial mistakes? If so, how did you address them?