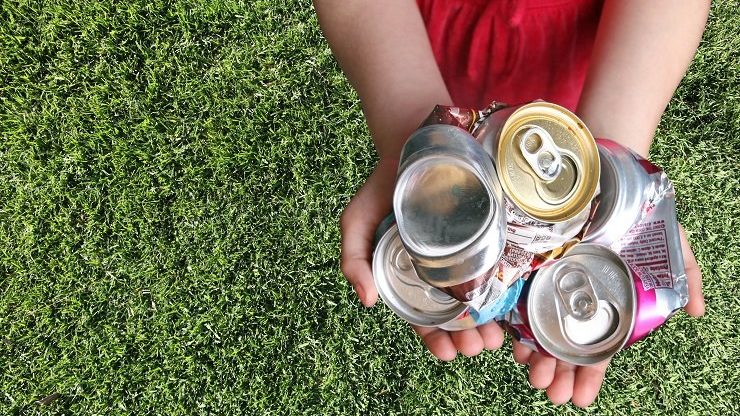 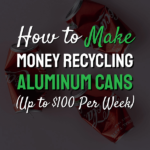 One of the ways you might be able to make decent money on the side is through collecting and recycling aluminum cans.

This can be a viable way to make money, but you’ve got to know how to do it in a way that provides the most profit.

The money you’ll make from recycling cans depends on a number of factors, but the good news is that startup costs are low.

With some garbage bags and a good source for collecting the cans, you’re ready to go.

How Much Do Recyclers Pay for the Cans?

According to the iScrap App, a national expert site on recycling scrap metals, the current national average pay for aluminum recycling is about 25 cents a pound.

Aluminum recycling prices are based on what the current commodities spot price for aluminum is, and you’ll generally find recyclers paying about half of the current spot price.

So, if the current commodities spot price is 50 cents, recyclers will likely be paying around 25 cents per pound.

What some people don’t know, however, is that aluminum prices are negotiable. So if you go to a recycling plant and they offer you 15 cents a pound, you can try and negotiate up to 20 cents a pound or higher.

Because of this, it’s important not to let a recycler low-ball you and pay you less than the current national average price.

It’s important also to remember that if you’re not getting paid on the spot for the aluminum cans you bring to the recycling center, that you should get your price and payment information in writing before you leave the center.

Since aluminum prices change daily, a day’s wait could result in a lower payout if you don’t have a written contract in hand for the cans that you deliver.

How Much Will You Get for Cans with Bottle Bills?

In some states, the average recycling prices for aluminum don’t apply because the state has enacted what’s called a “bottle bill.”  Bottle bills are state laws that put minimum payouts on recycled cans and bottles.

Currently, ten states in the U.S. have active bottle bills which require minimum payouts of between 5 cents and 10 cents per recycled aluminum can.

This means that if you live in one of the ten states with bottle bills, your income potential for recycling aluminum cans just went up astronomically. The current U.S. average price per pound of 25 cents translates to roughly one cent per can.

States that currently have bottle bills

Where to Collect Aluminum Cans

The first question you should ask yourself before starting recycling aluminum cans is “Where am I going to get the cans?” Well, you have several options.

First, start with your own home, family members, and neighborhood houses. Ask them if they bring their cans in for recycling and if they don’t, would they mind if you took them off their hands. Some families drink a lot of carbonated beverages, which can result in a lot of cans for your collection.

Be careful, however, about rifling through your neighbors’ trash bins for aluminum cans without their permission.

Some states have laws that prohibit doing so. If you aren’t going to have your neighbors set the cans aside for you, make sure you have their permission before getting the cans out of their curbside recycling bins.

Your Place of Employment

You can also check at your place of employment as a potential source for gathering aluminum cans. Most companies have soda machines in their breakrooms. What does your employer do with the cans that people get from those machines?

If you can get approval to take the cans home you can acquire a lot of cans as well. Just make sure there are garbage bags in the bins for easy removal.

Another option for collecting cans is local businesses. You might have businesses in your area that will allow you to set an aluminum can recycling bin in their breakrooms and collect the cans on a weekly basis for recycling.

Since the environment is an important issue for many people, local businesses may be happy to let you help their soda cans to avoid the landfill.

Some people get cans by setting up recycling bins in local school lunchrooms. Since many schools don’t have recycling programs in place, people’s used cans just go to the local trash collector.

If you can divert these cans for your private recycling business you can add a bounty of cans to your collection.

Outdoor concerts and festivals might be another great place to find aluminum cans to recycle. People attending these events often leave cans right out in the open on the grass or on tables, free for eager recyclers who are willing to collect the cans and turn them in for cash.

Where Do I Bring the Aluminum Cans?

Listings for local aluminum recyclers in your area can be found in the yellow pages in your local phone book, or at websites such as recyclingcenters.org.

Remember that all recycling centers have the option of paying different prices for the cans that they receive, so check online reviews and do your research to find the recycling center in your area that pays the best price.

Recycling aluminum cans by itself probably won’t make you financially independent, but it can be a way to make money quickly if you’re in a bind, especially if you and/or the people around you drink a lot of canned soda and other drinks.

Taking advantage of the free money laying around via aluminum cans can be worth the effort when done right.