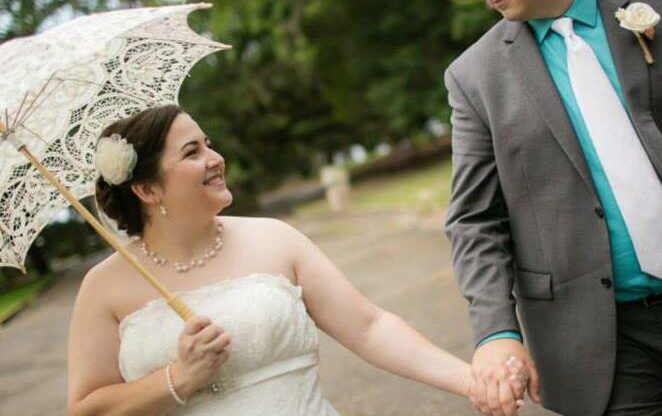 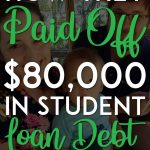 My wife went to college during the credit crunch and picked a very demanding four year degree, nursing. Due to the rigorous course load, Tori couldn’t work during school. She took out loans each semester to have enough money to make it until the next semester.

Unfortunately, due to the circumstance, she had to take out variable rate private loans at very high interest rates and they accrued interest until she graduated with over $80,000 in student loan debt.

Having over $80,000 of debt was no fun at all. The monthly payments were over $700 and would last for 10 to 20 years depending on the loan. That was more than the mortgage payment on our first home!

The debt constantly hung over our heads until the day we finally paid it off because we felt every payment we made was us living in the past.

We paid off the $80,000 in a little less than 3 years from when she graduated with her degree. It took a lot of hard work, but it was totally worth the extra effort and sacrifice to get rid of the student loan debt as fast as possible.

We found a spreadsheet that allowed us to forecast how quickly the loans would be paid off using methodologies such as the debt avalanche and debt snowball. After each extra payment, we’d update the spreadsheet to watch the pay off date inch closer and closer to the present day. It was a great motivator in paying off the debt.

We faced a ton of challenges, unfortunately. It took my wife four months after she graduated to find her first job and it was in a city an hour and a half away.

During the next three years, she had to go on short term disability twice for foot surgeries. We also used large chunks of cash to buy our first house (now a rental) and our second, forever home. All of these decisions set us back on our debt pay off journey, but they were all great decisions in retrospect.

We’ve been dating since she was in college and we just recently got married within the last year. Prior to being married, my wife paid off her loans with her money and I saved money in a special account to pay toward the loans once we got married. After we got married, we both started attacking the loans with every extra dollar we had.

Sometimes it was a bit difficult to keep sending money toward the student loan debt, but we both wanted it gone as fast as possible. Now that we’re past the debt, we can move on to our other goals.

My wife has worked as a Registered Nurse in hospitals and I have been working as an accountant, first in public accounting and now in corporate accounting.

It felt really good to get rid of the debt, but it still seems surreal. We’ve only had the debt paid off for about 3 weeks, so we’re still getting used to watching our bank account grow. We have some pretty aggressive goals to reach in the next year or two, but they’ll be fun to work toward.

I have a ton of tips to help people pay off their debt. In fact, I started writing a series about how to get out of debt when you have no clue where to start on my blog. Feel free to check it out.

A couple of quick tips that greatly helped us in our journey were to earn extra income wherever possible and to keep your end goal in mind whenever you’re thinking about making a purchase. Sometimes just thinking about the loans would allow us to put something back that we didn’t really need and here we are today, with all $80,000+ of student loan debt gone!

If you want to connect with Lance to see what he is up to today, check out his site at MoneyManifesto.com