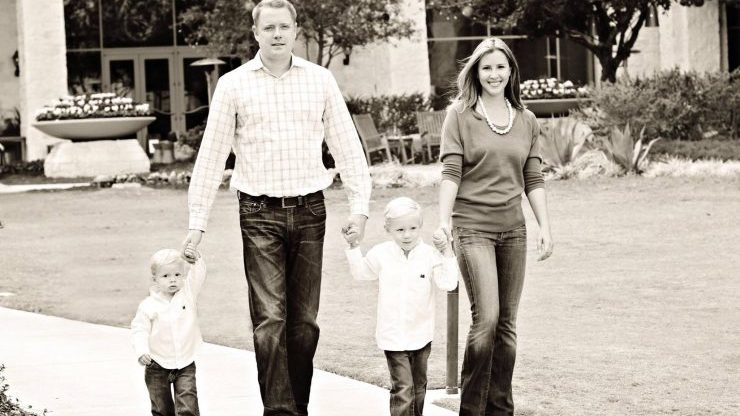 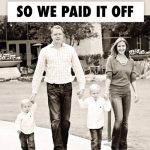 How did you acquire $110k in debt? What did that debt consist of?

In 2008 I somehow managed to convince this beautiful, smart, perfect girl to marry me. It was the best thing to ever happen to me, and to this day I marvel over it.

What follows is a real life love story of sorts: no magical kingdoms, just two people getting a clear vision about how to beat the odds together.

We were not too far out of college when we got married at a Vineyard in the Texas hill country in July 2008. We each had car loans, credit cards, and student loan debt.

Everyone we knew had a car payment and student loans, and likely some credit card debt. But when I really looked that monster in the eye, it was depressing and terrifying – especially with our first son on the way.

Looking honestly at that mountain of debt was positively terrifying, and I felt like a failure with nowhere to turn. Up to that point, my approach was to ignore reality so that I could function.

The great thing about fear is that it *can be* the best possible motivator if you let it. Fear pushed me off the edge from wishing and made me do something about it.

Slow and steady wins the race, at least in our case. Every month we would sit down and look at our budget. Every dollar left over after paying the bills went to *one* thing: first a credit card, then a car. Slowly we paid off our debts, smallest to biggest.

It was a real celebration for us to pay off a car, then a little while later a student loan. The wins got bigger and bigger and we could feel the path of our life changing.

Using a Google Docs budget I developed was the #1 resource we used, and we literally tracked every single dollar we made and spent during the 2 year journey. Simply observing where your money is going is a life changing event, it exposes so much.

It was fun to see the progress and make $1,000+ car payments with leftover money every month. The budget was our score card, and since we could control our spending, we could win. It was so important to set up the game so that we could win it.

Conversely, the default game created by marketers and credit card companies is set up so you fail and end up spending your life a slave to consumer debt.

I think about the scene in ‘The Matrix’ where you discover that the whole of humanity exists for machines to leach power while keeping people alive, barely. The idea of slaving away at a job in order to pay consumer debt to maintain the appearance of wealth is the same kind of losing scenario to me.

It takes conscious effort to create a game you can win, but anyone can. Thousands upon thousands have, you just have to be willing to be a little different for a period of time.

We used The Debt Snowball to pay off $52,000 in debt in 18 months! DOWNLOAD DEBT SNOWBALL FORM

Absolutely, but they were almost all of the man vs. self variety. You look at your co-workers driving expensive cars and buying big houses, and you think ‘I could finance that, but I’m choosing not to so that I can change the trajectory of the rest of my life.’

Getting out of debt makes perfect sense on paper, but it can be a mental and emotional struggle because we all constantly compare ourselves to our peers. During our journey, we never wanted for the basic necessities of life, but it can cause angst to live in a hyper-consuming society and deliberately opt-out of it for a while.

It was not fun driving a $6,000 Honda Accord when I made enough money to afford a $500 car payment, but I was going to kill that debt and that goal kept the fire burning inside me.

As you get acclimated to using a budget it can become a fun game to save money and beat your targets every month.

You don’t need much to be happy, but when you have disposable income it’s easy to get caught in this consumption=happiness lie. Millions upon millions of dollars are spent to make you feel inadequate.

The game is set up to make you fail by default, so you must create your own game and make it one that you can win. Stuff won’t make you happy, and it is liberating to step away from that vicious acquisition cycle.

When I first read Dave Ramsey’s ‘Total Money Makeover’ and told my wife that we were going to get out of debt, she cried.

Short term sacrifice didn’t sound like much fun to her! And who could blame her? We’d worked our whole lives to get through school and get good jobs in order to live ‘the good life.’

But once we put our plan together and started to see the results, the common mission and sense of shared accomplishment was simply a beautiful thing.

Killing the debt monster was also a hedge against disaster. We’ve all heard the statistic about money being the biggest cause of marital strife and divorce.

We were able to get so incredibly honest and clear about our finances, and we have never, ever had a fight about money in our six years of marriage.

It has set the stage for how our family interacts and what we teach our children.

What were you doing for a living while you were paying off debt?

I was in IT sales and my wife was teaching Kindergarten.

Not long after getting out of debt, my wife was able to stay home and raise our two boys. This has been a gift not measurable in dollars. To have my wife raise our boys and not have to work is a blessing.

Frankly, so is not having to pay for day care for our two kids! Of course, having the kids be able to have so many incredible experiences instead of being stuck in daycare is infinitely more important than money, but one lead to the other.

I had not experienced anything like it in my life up to that point.

The sense of control, accomplishment, peace, martial harmony, and shared vision was simply incredible and worth any temporary discomfort we experienced. That suffocating burden was lifted as we welcomed our first son into our life without the weight of that debt on our shoulders.

Second, start using a budget immediately. It may take a few months to dial in the numbers and to get over the shock of how poorly you have been managing your money. It was a big shock for me and took some getting used to.

Today, we have the nice house, we enjoy the peace of mind of not having consumer debt, we have peace in our marriage, and we started a real estate investment company that is doing huge, life changing things for us.

None of this would have been possible without the financial and mental foundation that taking two years to get out of consumer debt gave us.