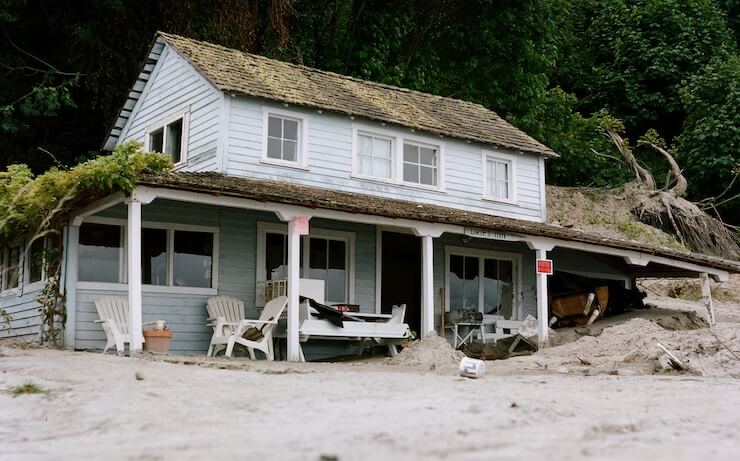 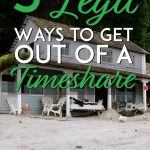 The draw of a timeshare is real. I know — my dad bought a few of them. He had two weeks at a Minnesota resort town. One in the winter and one in the summer.

They were fun! My kids and I went with several times. We swam, snowmobiled, boated. But of course, we weren’t the ones paying for it.

Timeshares can be a bad financial move. Some people call them a ripoff. But it’s super easy to get sucked in by the sales pitch. I’ve been tempted before myself.

You go and listen to the sales pitch. The lure is real. Salespeople are well-trained at making you envision timeshare life.

You fell for it. Now you own a timeshare. One week a year to stay at the same resort condo. You likely paid several thousand to get in. Then there’s the annual fee.

But you want to get out. You realize it wasn’t the best move for you. Are there legit ways to get out of a timeshare? Yes, there are.

We’ll share your options and help you unload it if possible.

How to Get Out of a Timeshare

So, you did it. You fell for the sales pitch and now you own a timeshare. And you’re out several grand. What to do? Consider these options.

Many timeshare contracts contain a recission or retraction period. This can be called a “cooling off” period. It’s a period of time after you signed the contract in which you can cancel. No questions asked.

The “cooling off” time period is typically just a few days long. In some states, certain requirements must be met before the time period begins.

Check with your state’s attorney general if your contract is unclear. But check the recission terms on the contract first.

If your timeshare purchase is recent, you may be covered. You may be able to annul the contract.

Note that official contract cancellations usually require written notice. So, plan on writing the timeshare company a letter. Sign it and keep a copy for yourself.

Note the date of mailing as well. Send it registered mail for extra protection. Your attorney general’s office can help you with the details.

2. See if the Company Will Buy it Back

In some cases, the timeshare company will buy it back. This is rare, but it does happen. Note that they likely won’t give you full price in a buyback.

Yes, you could lose money. Your timeshare contract should talk about buybacks. Some companies buy them back, others don’t. If yours does, contact them to see what their buyback terms are.

3. See if the Company Will Take it Back for Free

Some companies won’t buy timeshares back. However, they will take them for free. Yes, this is a colossal loss of cash.

However, remember that the goal is to stop paying fees. Annual fees on timeshares can add up fast. Some cost several hundred dollars a year to maintain.

In some cases, you can sell your timeshare to someone else. As with the buyback, you’ll likely sell it for less than you paid.

You can use a site designated for timeshare sales to advertise. Redweek.com lets people list timeshares for sale.

Note that companies like these charge fees to sell your timeshare. Read the fine print. Be aware of all fees before listing your timeshare on a sales site.

You could advertise on a free site, too. Craigslist and similar sites will let you sell a timeshare for free.

Have a company do it for you

Similarly, you could get help with your timeshare exit. Companies like Newton Group can assist. They’ve been helping people exit timeshares for over a decade.

They have an A+ rating with the BBB and they were a Torch Awards for Ethics Finalist in 2018.

5. Give Your Timeshare Away

The truth is, you might have trouble selling your timeshare. If you’ve tried and failed, consider giving it away. At least you can get out of the annual fees then.

TUGBBS Bargain Bin is a timeshare forum. They’re set up to help people get rid of timeshares,  and to help others who want to get them for free.

You won’t get up front cash. But you will get out of annual fees.

This might seem like a bad deal to you. After all, you paid thousands of dollars to buy your timeshare. But consider this: You’ll pay thousands more in annual fees if you don’t get rid of it.

If you can’t sell it for cash, you may just want to give it away. At least then it’s off your plate.

Why Timeshares Can Be a Bad Idea

You may be wondering what’s so bad about timeshares. After all, they cost much less than owning a vacation home. And much less than paying for a full vacation every year.

While that may be true, there are several downsides to timeshares. Consider these negatives before you buy one.

You’re Stuck With One Company

Some timeshares make you keep your week at your resort. You go the same place year after year. That can get boring.

Other timeshare companies have several resorts. They allow you to trade your week for one somewhere else.

Or, you can stay somewhere else if you pay an extra fee. While this sounds good, you’re still locked into the one company. You can’t vacation with no boundaries.

If you’re okay with that, great. But there’s a reason so many timeshares sit on sales sites with no takers.

You May Not Use It

I know several people who bought timeshares but don’t use them. They mean to, but things get in the way. Maybe it’s their schedule. Or that they no longer love the destination.

Timeshare sales pitches thrive on spur-of-the-moment impulses. The new and shiny idea sounds wonderful. There are bells and whistles and sparkly things.

Then reality sets in and it’s not as great as it once seemed. Or you just get too busy. Then you’re out the money and the vacation.

They Cost a LOT

Another reason timeshares can be a bad idea is because of upfront cost. Many units cost $15,000 or more at the outset.

When you add on annual fees, they get expensive. Wouldn’t it be better to spend your money how and where you choose?

They Don’t Appreciate in Value

It’s kind of like buying a new car. The value decreases as soon as you leave the lot. Or in this case, sign the contract.

Therefore your investment won’t increase in value. This is different than if you bought a vacation home outright.

Those buying timeshares from sellers get a much better deal. Resale prices on timeshares are significantly lower than the original sale prices. If you insist on owning a timeshare, buy used.

With investment real estate, you earn income. If you rent out a home, you collect rent.

That rule doesn’t hold true with timeshares. They cost you money. But they won’t earn you income.

They’re Not a Liquid Asset

As I’ve mentioned, timeshares aren’t an asset. But if they were, they wouldn’t be liquid. A liquid asset can be quickly sold to get cash.

On the contrary, timeshares are tough to unload. People have trouble giving them away.

Visit the website mentioned above (RedWeek.com). You’ll see dozens of timeshares selling for $0 or $1 just sitting there without buyers.

There’s a reason no one’s buying them. They just don’t make sense, money-wise.

That’s not to say that a small percentage of buyers aren’t happy with them. They can be good for some people.

However, many people find they’re a waste of money. Think carefully before you invest in one. And consider these timeshare statistics.

Some Statistics on Timeshares

Despite their oft-bad rap, timeshares are still selling in the U.S. Here are some facts regarding timeshare sales.

As you can see, timeshare sales are booming. However, that doesn’t necessarily mean you’ll want to keep one if you buy it.

People get lured in by the sales pitch. It’s like the honeymoon period of a relationship. Everything seems wonderful at first. Then real life sets in and the romance is gone.

You realize how much money you spent on the deal. And you think about other ways you could have used it.

Now you’re thinking about getting out of the deal. Or maybe you’ve had your timeshare for a long time. You realize it’s time to move on.

Why You Might Want to Get Out of Your Timeshare

Your timeshare may have seemed like a good idea at the time. However, things can change.

Here are some reasons you may want to get out of your timeshare.

You Bought it on a Whim

Yep, you fell for the pitch. You were drawn in by the sunny beaches and smiling faces by the pool. You’ve signed the contract and handed over big cash.

Now you want out. There’s no shame in that. This is why contracts often have recission periods. Refer to the first section of this blog for a refresher on that.

You Don’t Use It

People who buy timeshares sometimes find they don’t use them. Maybe they’re just too busy. Or they no longer desire the location.

Maybe things have changed in your family. Or your schedule. The kids are grown and off at college. Or married and living out of state. Whatever the reason, you may not use your timeshare anymore.

You Can’t Afford It

We live in a time of financial instability. The economy is improving, but it’s volatile, too. Maybe you just can’t afford your timeshare anymore.

The annual fees are adding up. Or the cost to travel there and back is too much. Maybe you’ve had financial setbacks.

There’s no shame in deciding the cost of your timeshare isn’t worth it. Or isn’t doable. It’s best to get out of it and move on.

You May Have Health Concerns

Have you had your timeshare for several years? Aging and health concerns may prevent you from using it.

It was easy when you were younger. Now you prefer not to travel. Or health concerns prevent you from doing so.

The point is that your timeshare owning days may be done. The reason doesn’t matter so much. The fact that you want out does.

Use the information above to get out of your timeshare.

Timeshares are a depreciating asset. There are always more sellers than buyers. And they don’t appreciate in value.

The first owners take the brunt of the depreciation. Our general opinion is that they’re not a great investment. However, that’s just an opinion.

You may find that a timeshare works well for you. But if you need or want to get out, follow the tips above.

The sooner you get rid of it, the more money you’ll save. You may not get money back on the sale price. But you’ll get out of the annual fees.

Have you owned a timeshare? Do you still own one? What do you think of the concept? Share your thoughts on our Facebook page.