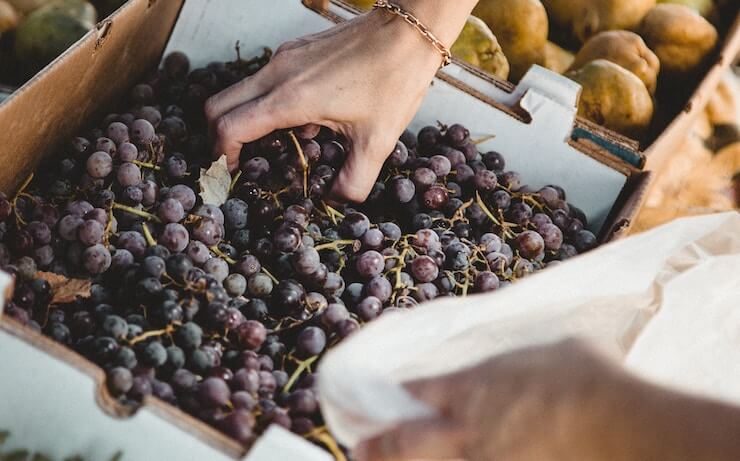 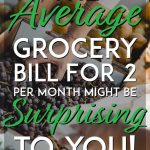 Do you spend more than you need to on groceries? I know I did. And what about 2 people?

When I first started tracking my family’s spending, our grocery bill was high. Not high compared to the country’s average  (we’ll talk more about that later). However, it was high compared to what we’re spending on groceries now.

When I first started tracking our grocery and other spending, we had no “plan” for our shopping.

I’d just hit the store on a whim and get whatever foods sounded good, plus a few basics. At that time, we were spending roughly $1,000 a month to feed our family of six.

That’s not a lot according to nationwide averages. However, it was a lot for us at the time. We were deep in debt and struggling to pay the bills.

After making a few changes to our grocery shopping habits, like using the money-saving app Ibotta, I cut our bill in half. Today, I never spend more than $600 a month on groceries.

In fact, my average is closer to $550 a month — and that’s with four teenagers in the house. My point is that it is possible for most people to spend less on groceries.

Let’s start by sharing what the average grocery bill for two is. We’ll look at a variety of factors, and then we’ll share some tips for buying groceries on a budget. Ready?

How Much Is the Average Grocery Bill for Two?

Every month, the U.S. Department of Agriculture (USDA) issues its Cost of Food Report. The report details the average weekly and monthly cost of food for individuals, couples and families.

We’ll use that report to talk about the average grocery bill for two. The USDA report details four levels of food cost plans:

The report also counts age as a factor. After all, a household of two adults will likely spend more on groceries than one adult and a two-year-old.

In this article, we’ll share costs for two adults living in one household: a man and a woman. For the month of May 2020, the average grocery bill for two was as follows:

For older couples, the average food costs were lower.

Using the numbers stated above, we can calculate what the average grocery bill for two is.

These are the most recent grocery spending numbers as of this writing. As you can see, the costs of the Liberal plan are nearly double those of the Thrifty plan.

Another interesting point is that older couples spend less on groceries than younger couples. There could be a number of reasons for this. We as humans tend to eat less as we get older. It’s possible that many people get more frugal as they age, too.

And, there are other factors that influence what we spend on groceries. We’ll talk about those in a bit, but first let’s talk history.

Are grocery costs on the rise? Do people spend more on groceries now than they did five years ago? Let’s take a look.

Is the Average Grocery Bill for Two on the Rise?

Luckily, the USDA keeps a history of food costs. This enables us to compare historical costs of food to see if food costs are on the rise.

Again, for older couples, the average food costs were lower.

As expected, prices were lower in 2015. While a roughly 4 to 5 percent increase over five years isn’t horrible, I’m certain the increase does make an impact on many families.

How Does Location Affect the Average Grocery Bill?

We can’t talk about grocery spending without taking location into account. Groceries on the East Coast, for example, often cost much more than groceries in the Midwest.

But how does location affect the average grocery bill?

There are limited sources of reliable data recording grocery prices by state. However, I did find one USDA report on milk prices for the first five months of 2020.

The average prices reported from various cities was not what I expected.

Taking surveys in your spare time can be a great way to earn some extra dough fast. Check out Survey Junkie which will pay you instantly with cash via PayPal. They have over 10,000,000 members and have an 4.5/5 rating on Trust Pilot.

I was surprised to find that milk in Minneapolis was quite a bit more expensive than in Milwaukee. After all, both Minnesota and Wisconsin are high producers of dairy.

And New York has notoriously high grocery prices. However, milk in New York City was also shown to be cheaper than in Minneapolis.

However, milk prices don’t tell the whole story. This report from the Missouri Department of Economic Development rates the cost of living per state. It ranks costs including groceries,  housing and more.

As you can see, the chart shows a noticeable difference in grocery prices. Arkansas residents, for instance, spend a lot less on groceries than those living in Nevada.

It’s clear that where you live does make a difference in how much you’ll spend on groceries.

Does Income Play a Factor?

According to the USDA, income also plays a factor in grocery spending. A USDA Report on Food Prices and Spending from 2019 found that the average family spent roughly 9.5% of its disposable income on food, which was an historically low number. And an average of 54.8 percent of that money was spent on food away from home.

If you’re average, then your income makes a difference in your grocery spending. For instance, if you bring home $2,000 per month then you’re apt to spend around 190 a month on groceries and eating out.

How Can You Save Money on Groceries?

Whether you’re in line with the USDA’s Thrifty plan or the Liberal plan, you can save money on groceries.

As I mentioned earlier, I spend an average of $550 a month on groceries for myself and my four teens. And guess what: We eat GOOD and healthy food. We even buy a lot of organic products.

Here are some tips to help you save money on groceries.

Start With a Plan

A menu plan is key to cutting down on grocery costs. It helps you avoid random trips to the grocery store. It also prevents last-minute take-out or restaurant runs.

Start by making a list of dinners for the week. Try to keep dinner costs moderate.

We usually do one or two expensive dinners, like pot roast. Then we sprinkle in low- and moderate-cost dinners for the rest of the week. Some ideas for cheaper dinners include:

By balancing out how much you spend on meals and including several cheaper meals in your menu plan, you can help keep costs lower.

When making our weekly menu plan, we try to plan meals around the week’s sales. If chicken is on sale, that’s our primary meat for the week.

If apples are on sale, I’ve got apples to give the kids for snacks. Work the sales to your advantage and try not to pay full price if you don’t have to.

Shop the sales to buy stuff ahead of time, too. Stock up on sale items you know you’ll need and use in the future.

Also, use money-saving apps like Ibotta to get extra cashback on grocery purchases. Ibotta has paid over $400 million to members in cashback on everyday purchases.

But make sure you’re not buying an item you won’t eat just because it’s on sale. The food is no bargain if it just goes to waste.

Ease Up on Processed Food Purchases and Eating Out

Processed food and junk food purchases can get expensive. Trim your grocery budget by cutting soda and other processed foods from the list.

If there’s a food you buy that you can make from scratch, do it. It’ll be better for you (no chemical preservatives) and taste better, too.

The same goes with eating out. Eating out is almost always more expensive than eating at home.

Grow Your Own and Buy Local

If possible, plant a small garden or use planters to grow vegetables. If you don’t have a lot of space, choose to grow the items you eat most often. You can freeze or can them to make them last all year long.

Depending on where you live, buying local can help cut costs, too. Farmers markets and local meat farmers sometimes charge lower prices than grocery stores. Shop your local farmers and see if you can save money on groceries.

The charts above on the cost of food for Americans vary greatly. There’s a big difference in spending $385 a month and $765 per month on food.

Of course, factors like income and location come into play. That being said, there are almost always ways to cut down on grocery costs. Follow the tips above to save where you can.

What did you think about the average cost of groceries for two? Were you surprised? How do you save money on groceries? Share your tips on our Facebook page.