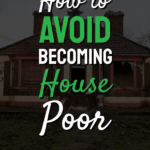 A downturn in the economy can happen anytime. And if you’re house poor, your risk of struggling to make your house payment goes up.

For that reason, we’re going to give you tips to avoid becoming house poor and falling into a situation where you can’t pay your mortgage.

What is “House Poor”?

The experts tell us that nearly half of Americans are what is described as “liquid asset poor”. This means that, essentially, they are living paycheck-to-paycheck.

A big reason that so many folks are living paycheck-to-paycheck is that they are, in all reality, house poor.

“House poor” is a term used to describe when a person’s house payment and other housing expenses are high enough that it’s affecting their ability to pay the bills or to have extra money.

Now, the point at which a homeowner feels strapped or overwhelmed by their housing expenses is different for everyone.

Some people may feel strapped when their mortgage payment and other housing expenses exceed 25% of their income.

Others might not feel overwhelming until their housing expenses exceed 40% of their income.

But the result of feeling that way is the same: The joy is sucked out of home ownership and the financial stressors affect the lives and families of the house poor homeowner.

That being said, here are some things you can do to avoid becoming house poor or to change your housing situation if it is already leaving you financially strapped.

1. Determine a Budget Limit on Your Housing

It’s not uncommon for people to buy homes with housing costs that equal up to 40% of their monthly budget. Financial guru Dave Ramsey sets a much more conservative housing budget of 25%.

You know what’s most comfortable for you as far as setting budget percentages for housing costs, but it’s safe to say that the lower the percentage of your income that goes toward housing costs, the better.

Think about it: The lower your housing and other expenses are, the more aptly you’ll be able to handle a shift in income, whether it be due to a job layoff, divorce or some other reason.

It’s important to understand the role your lender plays in determining whether you will end up house poor.

Interestingly, many mortgage companies today will happily lend a borrower with good credit and minimal debt a housing loan with total debt payments equal to as much as 45% of one’s monthly income.

The main problem with this is that lenders use gross income to determine these debt-to-income rations, not net income. So, in many ways, the industry sets borrowers up for failure.

Therefore you as a consumer must take control of your own financial decisions and destinies. It’s up to you to determine for yourself what size of house payment you’re comfortable with.

And what size of a house payment could potentially put you in a difficult situation in the future should our financial situation change.

Then make your purchase price one that’s low enough that you’ll be in a position to weather financial storms and come out financially safe on the other side.

When setting the percentage you’re comfortable with for a housing budget, be sure to leave room for income variance factors. That way, a sudden or unexpected change in income won’t leave you struggling to make your house payments.

The more wiggle room you leave in your budget as you plan for housing costs, the better able you will be to handle income changes. In addition, you’ll better be able to handle changes in those home expenses too.

Factors such as rises in property taxes, home repairs, and necessary improvements can put you into the “house poor” category as well.

The ARM, or “adjustable rate mortgage” loan, grew immensely in popularity before the housing bubble burst as people searched for ways to get the most house for their buck.

The popularity of the ARM was one of the biggest reasons for the housing meltdown in the first place.

Housing rates had been at historic lows for several years, and as is customary, Americans grew overly comfortable with the good financial times.

Talk about paying an “ARM and a leg!” As a result, many people became “house poor” seemingly overnight and what was once an affordable house quickly became an unaffordable burden.

When you’re looking at a long-term loan that won’t be paid off quickly, it’s usually safer to go with a fixed rate so you always know what your house payment will be.

If you made the mistake of taking out a variable rate loan, see if you can refinance to a fixed rate mortgage with a company.

They don’t just refinance student loans, but other types of loans too.

3. Have an Emergency Fund in Place

Another way to avoid becoming house poor is to make sure you’ve established a healthy emergency fund.

The bigger your savings cushion is, the more options you’ll have should you face a loss of income for some reason.

So before you buy that house, make sure you set aside a nice emergency fund cushion to prepare for unexpected expenses or a decrease in income.

If you’ve already purchased your home, make accumulating a healthy emergency fund a priority by selling unneeded items on Craigslist or temporarily getting a second job.

4. Avoid Comparing Yourself With Others

It’s also important to avoid comparing yourself with others, both before you start home shopping and after you’ve purchased your home.

I realize this can be difficult to do. However, you probably don’t know exactly what the financial situation is of the people you’re tempted to compare yourself with.

For that reason, making your home purchase or home improvements based on what others do can be dangerous. They may have more income than you or a larger down payment saved.

Or, they themselves may already be struggling with being house poor.

Moral of the story: Make your housing purchase and improvement decisions based on your best financial interests, not the appearances of others or concern about how they might view your home.

Next, let’s talk about what you can do if you’re already in a situation where you’re feeling house poor.

What if you’re already house poor and you know you need to make some changes to your budget? Here are some tips that can help.

When you get sick and tired of struggling for money every month, that’s when you can begin to make real changes.

One way to start getting uncomfortable with your situation is to start imagining all you could do in life if you had some extra money and weren’t so financially strapped.

Would you go on vacation? Buy a boat? Retire early? Work less hours and spend more time with family?

Once you’ve become tired of being house poor, you can work to change your financial situation as a whole.

6. Work to Change Your Financial Situation as a Whole

Changing your financial situation as a whole may not be easy to do, but it will be worth it. Start by taking a good hard look at your budget.

Ask yourself how you can make things easier by decreasing unnecessary expenses. Can you eat out less? Drop the cable TV subscription and use some cable TV alternatives?

Where else can you cut expenses–at least until things aren’t so tight.

Conversely, can you increase your income? Get a part-time job? Pick up a side hustle? Another suggestion would be to ramp up your emergency fund savings.

At least that way you have a nice cushion to help buffer the tight budget. The more you do to better your financial situation as a whole, the less stressful your housing expenses become.

Another idea to help if you’re already house poor is to consider renting out a room. You can rent out rooms on a nightly or weekly basis through a site such as Airbnb.

Or you can rent out a room or your basement or attic to a long-term tenant and have some guaranteed monthly income.

Use this extra income to pay down your mortgage or other debt quickly, or to pad your emergency fund.

8. Know When it’s Time to Sell

And finally, if you’re already in a house poor situation, take the time to analyze your situation honestly. Make a determination about whether or not it’s time to sell and move into something more affordable.

Many individuals and families have testified to the fact that the reduced stress about money is well worth giving up your “dream” house for.

If you’re in a situation where the stress of your house payment is becoming too much to bear, consider selling the house and buying something less expensive, even if that might mean a move to another city.

No material item is worth the difficulties that a financially stressed situation bring to one’s life.

If you’re looking to buy a home, it’s wise to research and plan carefully before you sign on the dotted line and commit yourself to 15 or 30 years of loan payments.

The resulting financial security that will be yours when you choose to avoid a house payment that’s too large for your budget will be well worth the time and effort you put into making a sound budgeting choice for your home purchase.

Also Consider selling, renting the house out and living elsewhere, getting a roommate or some other form of increasing your income or reducing your payments.

That way you can be more comfortable with your housing expenses. The rewards and peace of mind that come with financial security is well worth the sacrifice of not having to live “house poor.”