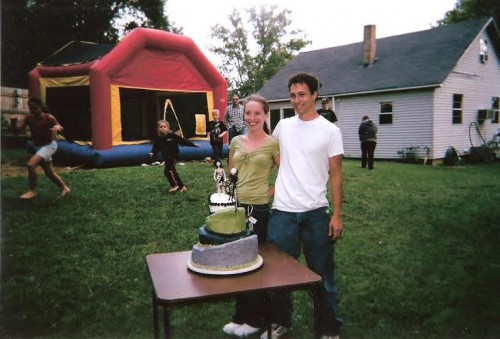 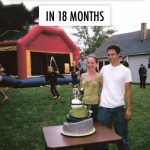 Our debt was 100% a car loan. My wife, Mrs C., and I had always driven beater cars. Shortly after our son was born, my wife wanted to buy a newer vehicle. It was 2008 and we were doing pretty good financially. We owned a house and had several thousand dollars in the bank.

Our payment was just over $270 a month, and our insurance went up because we had to have full coverage.

At first it actually felt like we were doing something smart. Our credit union issued the loan, which was at 6.5% interest. At the time they were also paying us 6% interest in our checking account for balances up to $10,000.

To me it seemed like it didn’t make any sense to pay off the loan early, because we were effectively borrowing the money for .5% interest.

A few months into the loan our credit union cut the interest rate they were paying us to 2%. At this point mathematically it didn’t make sense to keep the loan around.

I was also noticing the effect the payments were having on our finances. We never had a car payment before, so even though we were borrowing money at a relatively low interest rate, we still had to make a $270 payment, plus the increased cost of car insurance, which was over $50 a month more.

It probably wasn’t even 4 months into the loan that I was feeling a lot of pressure from having this extra payment. It honestly felt like the car owned me and not the other way around.

How long did it take you to pay the car loan off?

It took us 18 months to pay it off in full. We took a large chunk of cash from our emergency fund and put it onto the car, cutting the balance down about 30%. I then started making double payments every month and did this for about 6 months.

I had just started traveling for work and since I had an increase in income we had even more money to throw at it. There were some months I put $1,000 on it.

Part of my compensation was $40 a day for meals and incidentals while on the road. I ate cheaply, and kept my expenses to under $10 a day, banking $30 a day while I was working. Over a 6 week job, this amounted to over $1,200 in tax free cash that I could throw on the loan.

What resources did you use during this process?

The number one thing that helped keep me motivated was listening to the Dave Ramsey Show on Fridays. Hearing people calling in and explaining how they were able to get out of debt was very inspiring.

I also used my banks online program to pay down the debt. I didn’t have to wait for a statement to see how much I had remaining. The banks program also automatically adjusted to show how much longer I had to pay the vehicle after factoring in the early payments if I only paid the $270 a month.

Watching this drop from 5 years to 4 years to 2 years to 6 months provided a lot of motivation.

Sure. There were several. My job is seasonal, so I had a couple periods of unemployment in the mix. Having 1 – 2 months off at a time isn’t too bad, but I had a gap of a bit over 3 months during this period.

My wife worked more hours during that time and we worked to find ways to make extra money. I tried to sell some stuff on craigslist and eBay.  We also had some high dental bills come up.

I think it helped our marriage overall. We worked together as a team to accomplish a goal and in the end we had a decent vehicle and learned something about debt management in the process.

I can’t see going into debt for a vehicle again. We plan on keeping the Odyssey for several more years.

What did you do for a living while you were paying off debt?

I was working as a contractor for nuclear plants during refueling outages.

It felt like we got a major raise once the van was paid for. Going through the process of paying it off quickly helped us save money going forward.

It really did feel as if a large weight was lifted off our shoulders.

In addition to tracking the amount of money paid down on a loan, keep track of how much time you have saved by paying it down quickly.

Seeing that number change makes a big difference. Even if you still have the payment, knowing that your efforts thus far have cut off 18 months, 2 years, 5 years or more from the length of the loan helps a lot with staying motivated.

This is part of a series called “Debt Success Stories” which features people who were able to pay off a significant amount of debt in a short period of time. If you have a Debt Success Story I would love to hear about it. Please visit the contact page to let me know the details.