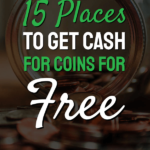 Want to get cash for coins? I can help.

One way family saves money is by saving coins. Every time we pay cash and get change back, the coins go into a jar. We don’t miss them, and in fact, it’s nice not to have to walk around with that heavy change in our purses and pockets.

We try to designate the coins for a specific purpose. It might be for a vacation or for a Christmas fund.

You can do this, too. Save your spare change so you’ve got money when you want to do something fun. Or, you can use it to work toward financial freedom.

However, what to do with the coins once you’ve got a purpose? You can’t head to the airline counter with a jar full of coins, after all. You’ve got to cash them in first.

Places to Get Cash for Coins

Where can you get cash for your coins? Here are some options.

Many banks have coin counting machines. You typically have to be a member to have coins counted for free. Non-members usually have to pay a fee.

Note: I was a bank teller for many years at a local branch of a national bank that told us they didn’t want rolled coins. They’d make us open up the rolls and put them in the coin counter.

This was because people would try to scam the system. They’d put some fake coins in each roll, or they’d put a few pennies in a roll of nickels, for example.

I’m not sure what the rules are these days. However, I’d suggest checking with the bank before rolling up your coins. It’s a good idea to call ahead anyway to see if they even have a coin counting machine. I’ve read that some banks are getting rid of them.

You should also call if you don’t have an account at the bank to see if there’s a fee to cash in your coins. When I was a teller, we charged 10% to non-customers for coin counting.

Retailers sometimes have coin counting machines that let you exchange coins for cash. You pour your coins into the machine and it will count them.

Note that it will spit out any coins it can’t identify. This could include foreign coins, damaged coins and non-coins.

If the machine spits out a real coin, put it in again. Sometimes you can get it to register by doing that.

What is Coinstar’s Fee?

Coinstar charges 11.9% to turn your coins into cash. You can read about how to get around that toward the bottom of this article.

QuikTrip gas stations and convenience stores have over 800 locations in the Southeastern, Midwestern, and Southern U.S.

According to this article, you can turn your coins into any QuikTrip location and get cash. The article says that if your local store doesn’t have enough cash to cash out your coins, they’ll give you the remaining balance in the form of the QuikTrip gift card.

QuikTrip isn’t charging a fee for this service.

Walmart has over 11,000 stores worldwide. If you live in the U.S. there’s likely a Walmart near you.

Almost all of the Walmarts in my area have Coinstar machines. Walmart seems to be the largest Coinstar host store, at least in my area.

Kroger has more than 2,700 grocery stores in 35 states in the U.S. Many Kroger stores have Coinstar kiosks. Check your local store for more information.

CVS Pharmacy has over 9,000 stores in the U.S. It has stores in every state except Wyoming. Check your local CVS to see if it has a Coinstar kiosk.

There are more than 300 ShopRite grocery stores on the East Coast. You can find them in several states, including:

Check your local ShopRite to see if they have a kiosk.

Hy-Vee has over 200 grocery stores in the Midwest. Some states include Minnesota, Wisconsin and Nebraska. Your local Hy-Vee may have a Coinstar kiosk.

There are more than 200 Meijer retail stores in the Midwest. They’re located in the following states:

Visit your local Meijer store for a Coinstar kiosk. Not all locations carry kiosks.

Albertsons has over 2,000 locations throughout the U.S. Some states include Texas, New Mexico and Illinois.

Your local Albertsons store may have a Coinstar kiosk.

Harris Teeter has more than 200 supermarkets in seven U.S. states. They’re located in:

Hannaford has nearly 200 stores in New England and New York. Note that not all locations have Coinstar kiosks.

Cash Wise foods stores are located in Minnesota and North Dakota. There are dozens of stores. Check your local Cash Wise store to see if they house Coinstar.

There are more than 1,800 Target stores in the U.S. Not all Targets have Coinstar kiosks. In my major city, I couldn’t find a machine at a Target.

Check your local Target store to see if it has one.

Kmart stores are dwindling in number. However, there are still over 40 in the U.S. You might find a Coinstar machine at your local Kmart.

Lowe’s is a home improvement chain with more than 2,000 stores in the U.S., Canada and Mexico. Some stores may carry Coinstar kiosks.

Again, not all store locations have machines. As I mentioned, most of the Walmarts in my area have them. However, very few Targets have them.

You can find a kiosk location by going to the Coinstar website. Or you can ask at a store near you.

I know, that’s a LOT of money. I’m not a big fan of paying fees. You’re likely not either. However, there are a few options for avoiding the fee. Check out these choices.

Get an e-Gift Card

Coinstar does have an option where you can get an e-gift card instead of actual cash for your coins.

You won’t pay a fee if you get an e-gift card. Coinstar has several e-gift card options. They all come with minimum and maximum dollar amounts.

Note that the retailers and amounts are subject to change. However, if you’re looking to avoid the Coinstar fee, this could help.

Give the Money to Charity

Coinstar will waive the coin counting fee if you donate the money to charity through them. Their list of available charities is small. However, they are all good choices.

There’s something for everyone on the charity list. If you want to give your coins to a good cause, you can go this route.

I’ve found saving coins is a great way to save money. You don’t miss them when you throw them into the jar. They almost don’t seem like real cash.

Sometimes we’ll throw dollar bills into our coin jar, too. They really add up over time. You can save several hundred dollars a year this way.

Using your own bank is the cheapest way to get cash for coins. However, if that’s not an option you have Coinstar.

You may pay a fee with Coinstar, but at least you’ll get cash.

Do you save coins? If so, how do you cash them in? What do you use your saved coins for? Vacations? Big purchases? Leave a comment on our Facebook page, and share this post via social media.