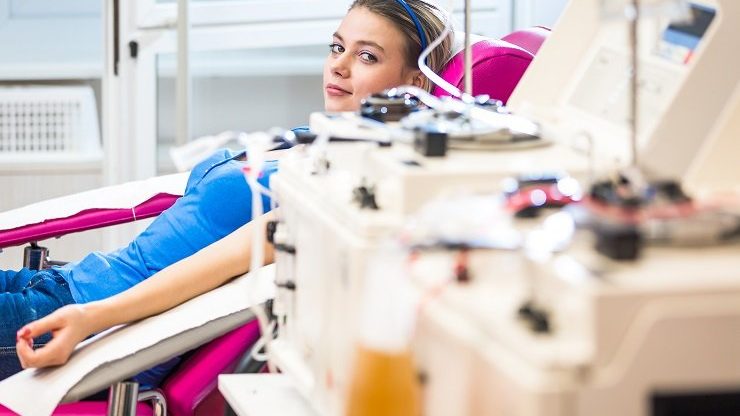 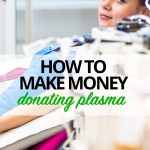 Every week, I see someone asking, “Does anyone how I can make easy money on the side?” Usually, a few people respond with MLM or Lyft as suggestions, but I rarely see what I think is the easiest way to earn a few bucks: sell your plasma.

But anytime you decide to meddle with your body, there could be consequences. Read below to see if it’s the right side gig for you.

When I was a senior in college I needed money, so I started selling plasma at the local center. I lived in a big college town, and I’m sure there was no shortage of students willing to be poked with a needle in exchange for $20 (I bet many did that on the side for free!)

I started donating plasma because I was a full-time college student who was busy applying to internships and figuring out what I was going to do after graduation.

I didn’t want to get a part-time job and wanted something easy to earn a little bit of spending money. Remember, this was in the days before you could earn money by driving people around.

I was a little wary. Selling your plasma sounded like what junkies did to earn money to support their habit.

But I quickly realized the appeal of donating plasma. After the initial two-hour visit, most appointments lasted an hour and I could go anytime I wanted. It was easy to schedule an appointment or cancel.

I continued to donate plasma after graduation when I was trying to support myself for the first time. I was working part-time at a call center and had an unpaid internship an hour away.

Giving plasma allowed me to earn some money without trying to take on another part-time job.

Unfortunately, I had to stop because of health reasons. Every time you stop in you have to get your hemoglobin levels checked. If they’re high enough, you’re good to go. If they’re too low, they won’t let you donate.

Hemoglobin is a protein that carries oxygen to tissues in your body. If your hemoglobin dips below a certain amount, then you’re anemic.

After a few weeks, my hemoglobin levels fell beneath the allowable range for plasma donation. Every time I went in, I was denied. I tried taking iron supplements, but they messed with my stomach and made me feel sick.

After a while, I stopped going to the plasma center. My doctor said I wasn’t anemic, but my hemoglobin levels still weren’t high enough for me to donate safely.

I probably could have kept trying, but it seemed like a waste to drive all that way to find out I couldn’t donate.

Why I Still Recommend Donating Plasma

One of the best reasons to donate plasma is that you can do other stuff while you’re sitting in the chair. You can read, watch TV, do homework or listen to music or podcasts.

I was in college when I started donating, and even though I told myself I would bring my homework, I could never focus enough to be productive.

If you can’t get a part-time job with set hours, then donating plasma might be perfect for you. I loved that I didn’t have to worry about fitting in my plasma appointments alongside my internship and my other job.

What is Plasma Donation?

Plasma donation is when people sell the plasma portion of their blood. Plasma is used by pharmaceutical companies to develop drugs to treat diseases like hemophilia.

Your plasma contains antibodies, enzymes, and other proteins. See here for more uses of plasma.

I hate getting blood tests and donating plasma was definitely an uncomfortable experience. Once the initial needle is in, it’s not painful.

While the machine is sifting the plasma from your blood, it puts blood back in with a saline solution.

For some reason, that saline feels cold when it enters your bloodstream, so you’ll feel pretty chilly during the experience. I recommend bringing a jacket or blanket with you.

Are There Long-Term Effects?

There are no long-term effects for donating your plasma. However, in the short term, you might feel dehydrated. You can rectify this easily by drinking more fluids before and after donating.

Overall, plasma donation is incredibly safe. Yes, you might be in the same room with some unsavory looking characters, but your health isn’t in danger.

Some people might have more adverse reactions to plasma donation, so always watch for any unusual symptoms after your appointment.

I will also point out that many people, myself included, develop track marks after a few weeks of donations. These are small scars that develop at the injection site.

They don’t hurt or anything, but since drug users are more commonly associated with having them, some people are wary. Nobody, I know noticed mine unless I pointed them out. They go away eventually once you stop donating.

How Much Can You Get Paid to Donate Plasma?

Ah, the million dollar question. When I donated plasma, I made about $20 per donation. But each center has their own policy, so try to call around before you decide. Depending on the city you live in, some places pay up to $50.

My center offered a bonus if you donated a certain amount of times within a month. This is pretty standard. You can usually give two times a week with at least 48 hours in between for your body to recover.

Qualifying for the bonuses is the best way to maximize your earning potential. In some cases, you can earn around $200 a month.

Most pay via a prepaid Visa gift card so you can withdraw cash from it or use it like a debit card.

Is Donating Plasma Worth It?

This question is pretty subjective. If you get queasy at the site of a needle, $20 might not be worth it. If you’re desperate for an easy way to earn money, it might be.

Overall, the flexibility of plasma donation is its key characteristic. It’s like driving for Lyft – you might not make as much as you could doing something else, but it’s one of the only things you can do where you choose the hours.

What are the requirements?

You have to weigh at least 110 pounds, be between 18-69 years old and have a clean bill of health. Most also require that you produce an in-state driver’s license, a social security card and proof of address.

The center will test your blood for diseases and they will also test your protein and hemoglobin levels. If those are too low, you’ll be ineligible to donate that day and will have to wait a certain amount of time before you can come back.

People who have donated blood have to wait about eight weeks or so to donate plasma.

If you ever need extra money but don’t want the hassle of interviewing for a retail gig or driving for Lyft, plasma donation is your best bet.

If you want to do something that pays better, there are lots of side hustles that pay well and don’t require you to get poked with a needle.