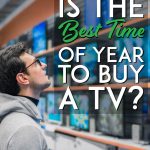 Are you in the market for a new TV? Maybe you want to trade your 45-inch model for a 60-inch set, or get a giant screen for that theater room you’re putting together.

Televisions can be expensive, so they’re not something to buy on a whim. However, if you’ve planned and saved, it might be time to buy a new one.

Of course, you’ll want to get the best price you can. One thing to think about is when the best time is to buy a new TV.

There are a few times of the year when you’ll get the best deals on TVs. There’s also a time of year that’s the worst to buy a new TV. We’ll talk about those below.

Here are the four best times of year to get a new TV.

Black Friday has been the best time to get great TV deals for years. People line up for hours before store openings to get TVs the day after Thanksgiving. And often, they can snag killer deals.

There’s a lot of competition among stores this time of year. Big retailers like Amazon and Walmart have price wars.

Electronics stores like Best Buy have doorbuster deals, too. And even smaller stores have at least one or two awesome deals usually.

You’ll find deals both in-store and online. This is the time of year when prices are at their lowest.

Deals Reside Both Online and In-Store

Stores know they’re competing with online retailers like Amazon. And they know you have instant access to online pricing. You could easily find a TV you like in-store and go home and buy it for a cheaper price online.

That’s why stores have experts working to monitor online prices during big sale days. In fact, you might see stores change prices mid-day to remain competitive. They monitor competitor pricing and lower prices in real time as needed.

Another tip? Check ads the week before Black Friday. Retailers often want to get a jump on the big sale days, so they might offer some equally great sales the week preceding Black Friday.

The same goes for the week of Cyber Monday. In fact, you may find the lowest-price deals during that week. This means you can skip the Black Friday craziness.

Instead, be patient and wait to see what Cyber Monday week holds. You might end up getting a better deal.

Ahh, the blessed Super Bowl. Even non-football fans gear up to watch the Big Game. Who can resist the battle between the year’s best football teams, not to mention the award-winning commercials?

Another great thing about this time of year: terrific TV prices. The holidays are over and retailers are eager to start clearing out the previous year’s models before the new ones arrive a few months later.

And people like us are hyped for the game. We’re drawn in by the lure of a bigger, brighter TV to watch, whether it’s with a huge group of friends or just the family.

Stores know we as sports fans think this way. Therefore, they offer deep discounts to make sure we follow through with a purchase.

But it’s important to know exactly how they time those deals. Some weeks have better TV prices than others.

Consumer Reports writes that Weeks 3, 2 and 1 preceding the Superbowl are best, where Week 1 is two weeks before the Super Bowl, Week 2 is three weeks before the game, and so on. Stores offer the deepest discounts during those times of the pre-Super Bowl season.

Weeks 4 and 5 preceding the game have the smallest discounts. Similarly, if you wait until the week of the game, you may pay more.

That’s right, discounts aren’t as deep during the week of the Super Bowl. I’m guessing stores view that as an impulse-buying week. People are up against the deadline of the game, and may be willing to pay more at the last minute.

During the New Release Season

Every spring TV makers come out with new models. They’re bigger and better. They have more bells and whistles. And they cost more.

Mid-March to mid-April are when new TV models are released. You should start to see ads for new models in March.

The latest and greatest technological advancements arrive during this time — and full prices with them. However, new TV models in-store mean all of the old models go on sale.

Store managers know that the sooner the old models are gone, the sooner they’ll have more space to house the new, pricier models.

Prices on older models start to go down as soon as new models hit the stores. The further you get into spring, the better the deals.

This is because stores start to weary of housing the old models. They offer deeper discounts in order to clear them out.

However, if you wait too long you might miss the deals. You may find that closeout deals have cleared the TV inventory quickly.

I’d start shopping in May at the latest to save money and get closeout deals. Don’t assume merchants will still have closeout models available in July. But if you do find an old model available then, you should get a terrific deal on it.

Labor Day weekend is another big shopping time. Retailers figure non-travelers will use the time off to shop.

Therefore, store ads offer great discounts on many things, including TVs. You’ve likely seen ads for great prices at that time of year. However, the discounts aren’t as deep as at other times mentioned here.

If you can wait until Black Friday, do so. Or, if you can buy a closeout model in  May or June, do that. The same goes for Super Bowl time. Prioritize those times over Labor Day.

But if you have to buy in fall, shop on Labor Day weekend. You’ll still find some terrific deals. Check local and online ads to find the best prices.

When is the Worst Time to Buy a TV?

If you have to buy a new TV, don’t buy it in mid-April. Instead, wait for one of the other sale times mentioned here.

Here are some other tips for buying a new TV. They’ll help you get the best deal on your purchase. Combine these tips with great sale times and you’ll do well.

These tips might not be well-known, but they do work. Use them to increase savings or get a better TV.

Consider What Size TV You Want

Do you want the TV to be big enough that you can watch it in a large family room with lots of people? Or do you want a smaller set for your bedroom or a kid’s room? Answering those questions will get you in the ballpark of what size of TV you want.

Then you need to think about how far away from the TV you’ll likely be when you watch. A very rough rule of thumb is to use a 2:1 ratio of distance to TV size.

For instance, if you think you’ll be sitting about 7 feet (84 inches) from the TV, get a 42-inch screen for a comfortable experience.

The same idea works in reverse. Let’s say you want a 60-inch TV. You’ll want to place it about 10 feet (120 inches) from your couch or wherever you think you’ll be watching to TV.

In other words, multiply the diagonal size of the TV screen by two to get the ideal distance, in inches, from the TV.

It’s a good idea to visit a few stores before you buy. First, compare brands. Go to the store and see which brands you think have the best pictures. And pay attention to the different sizes, standing from different distances.

Which store has the best deal? Does one store have a clearance TV you like? Is another advertising a deal on a new model?

A television is a big purchase. Check multiple stores before you give them your cash.

I know, it can be a pain to have a retailer on your social media timelines. However, stores do give social media followers advance notice of deals.

If you want to be in the know ahead of others, use social media. Follow stores that sell TVs. And follow different brands of TV makers, too.

It’s okay to buy online. However, experts recommend first looking at TVs in-store. Check out the picture on the models you’re considering.

You’ll get a better idea of what you really want. When viewing in person you might find out the 60-inch isn’t what you want. Instead, the 70-inch might be better for your home theater.

Go ahead and buy online if you find the best deal there. However, shop in-store first to look at picture quality.

Be Aware of Price Matching Guarantees

Some stores and credit cards have price match guarantees. Know about them before you shop. You could save yourself some big money.

Note that price match guarantees come with conditions. For instance, you may have a limited time (often 60-90 days) to prove that you’ve found a better deal elsewhere. Read the fine print before you buy.

There are several great times of year to buy a TV. As you’ve read, some times are better than others. Black Friday and Cyber Monday tend to offer the best deals.

You might be forced to buy a TV when prices are higher. However, if you shop around you can likely find a deal or sale somewhere.

Maybe it’s a closeout model that’s still sitting around in August. Or a pre-Black Friday sale in October. But you’ll find the most deals during the times mentioned above.

Use the information above to get the best deal on your new TV.